What is Eddy Current Testing?

Eddy current array (ECA) is a nondestructive testing technology that provides the ability to electronically drive multiple eddy current coils,which are placed side by side in the same probe assembly.Each individual eddy current coil in the probe produces a signal relative to the phase and amplitude of the structure below it.This data is referenced to an encoded position and time and represented graphically as a C-scan image.Most conventional eddy current flaw detection techniques can be reproduced with ECA inspections;however,the remarkable advantages of ECA technology allow improved inspection capabilities and significant time savings.

Eddy current (EC) testing is a no contact method for the inspection of metallic parts. Eddy currents are fields of alternating magnetic current that are created when an alternating electric current is passed through one or more coils in a probe assembly. When the probe is linked with the part under inspection, the alternating magnetic field induces eddy currents in the test part. Discontinuities or property variations in the test part change the flow of the eddy current and are detected by the probe in order to make material thickness measurements or to detect defects such as cracks and corrosion.

Over the years, probe technology and data processing have advanced to the point where eddy current testing is recognized as being fast, simple, and accurate. The technology is now widely used in the aerospace, automotive, petrochemical, and power generation industries for the detection of surface or near-surface defects in materials such as aluminum, stainless steel, copper, titanium, brass, and even carbon steel (surface defects only).

Various materials could be checked, like carbon steel, stainless steel, duplex, alloy or other conductive materials.

The drawing below represents schematically the defect detection by eddy current. The two coils (red) were pulled over the defect and the typical signal appeared on the screen. The inner and outer defects have different signals depending on their deepness. This gives the operator the opportunity to decide what kind of defect is in the tube.

SURFACE CRACK INSPECTION
The cracks below could be found by eddy current. Special probes allow to detect inside cracks from outside, depending on the material and wall thickness. Even microcracks in Formula 1 Valves are detected with eddy current by EC-Works. 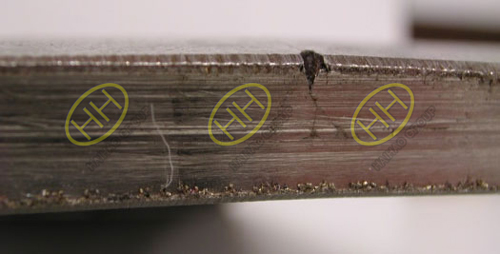 Eddy current offers the following capabilities:
Quick, simple, and reliable inspection technique to detect surface and near-surface defects in conductive material Can be used to measure material electrical conductivity Measurement of nonconductive coating Hole inspection with the use of high-speed rotating scanner and surface probe

If you would love to know more technical information,please feel free to contact us.Email:sales@haihaogroup.com

Eddy current testing , NDT
Share:
PREV： What is PT test in NDT?
NEXT： What is the ultrasonic testing？